It’s such a difficult subject to talk about yet it affects so many people – Baby loss.

* Trigger Warning this post contains my experiences of miscarriage and may be triggering for some, please read with caution and only if you feel able to *

Its Baby Loss Awareness week, an event held each October from 9th to the 15th. It involves many pregnancy and baby loss charities and as the miscarriage association explain How important it is.

I mainly blog about my previous experiences with postnatal and antenatal depression, and also my anxiety. However I wanted to share my story this week, not only to raise awareness and add my story to help break the taboo but because my miscarriage triggered depression and anxiety. It had a profound impact on the pregnancy which followed and was, I feel, made worse by the stigma I felt so I didn’t reach out to anyone.

It was the end of summer 2013 and I had started to slowly recover from my PND. We were rebuilding our lives, but there was one nagging thought my husband and I had in our minds….a strong longing for another baby. It was a decision we talked at length about due to my previous mental illness and struggles but eventually we came to the decision we would really like a third child. Looking back with hindsight maybe we could have benefited from waiting a little longer to make sure I was fully recovered but I was adamant If we were going to do it, we needed to try and do it soon so the three children were close together.

Over the Christmas period of 2013 we fell pregnant. We were over the moon, and we looked forward with excitement at the prospect of expanding our family. However 6 short weeks into the pregnancy I began to bleed. I hoped it was just my body settling down and it would go away. I had experienced a heavy bleed with my first pregnancy and everything turned out fine, so I clung onto the hope that maybe it was just this again.
However the bleeding didn’t stop, it got heavier and I began to experience cramping and pain. I knew in my heart what this meant but as we made our way to the early pregnancy unit for a scan I prayed for a miracle.
I was sat next to a lady who had just had her scan, everything was ok with her baby, she clutched the scan print, beaming and happily chatting with her partner. She was ok, so maybe I would be, I thought. We waited and waited until eventually my name

was called. I lay on the bed and intensely watched the sonographers face, I could tell by looking at her expression my dream had just shattered.
“There’s no signs of pregnancy….oh wait….there’s a mass on your ovary….I need to do an internal scan” ….. so matter of fact, an everyday thing which she probably saw, but said with no sympathy. An unfortunately common experience, but to me one in which my world felt it was crashing down.
The internal scan confirmed there was a mass on my ovary, I was advised I was most likely having an ectopic pregnancy and I would require emergency surgery to remove “the mass” …..the language used hurt…..it wasn’t a mass it was my baby. I was explained in a very rushed manner what I would need to have done and sent back to the waiting room.
I tried to hold it together, I didn’t want to cry in front of everyone. But as I was having my bloods taken and a cannula fitted I began to cry. They couldn’t get any blood, and I sat alone behind the reception while they fetched someone to help. I couldn’t hold it in anymore and the tears just flowed.

I was taken to a ward to wait for my surgery. Three other ladies were apparently in for the same thing, I was told it could be a long wait. I was sat with three ladies who were having hysterectomies and other gynological operations, they were cheerfully chatting but I just couldn’t join in.
I began to cry again, I had a wonderful, kind and sympathetic nurse on the ward. She was really wonderful, I wish I had remembered her name.
There was something which I didn’t expect and which made me sob uncontrollably; it was some forms I had to sign. The kind nurse gently explained that my ovary and Fallopian tube would likely be removed along with my baby. She asked if I have permission to have these and my baby cremated and ashes scattered over at the local baby cemetery. This hit me so hard. It was all suddenly so real. It made me extra emotional as the area she described was directly opposite my Nan’s gravestone in the crematory, so they would be near each other.

The kind nurse arranged for me to leave the ward and have my own room, I was advised my operation would be the next morning. That night was a long, emotional, and desperately lonely one.

The next day I went in for my operation. When I woke the nurse told me they hadn’t needed to remove the ovary or Fallopian tube after all. A small positive within this awful experience.
I went back to my room and waited to see the doctor. They told me they found no signs of ectopic pregnancy and the mass was in fact endometriosis. I had ‘only had a “normal” miscarriage’ ……. I flashed back to earlier the day before when I had lost some large clots. That must have been it, I began to cry again at the thought I had probably flushed my baby down the toilet. This was a thought I struggled with for a very long time.

I was sent home, struggling with the huge emotional pain as well as physical pain from surgery. I spent a week trying to recover from the operation, we celebrated my sons birthday a couple of days later and I felt I had failed him as I was in such pain I couldn’t manage to go out anywhere.

I spent many nights crying, days were a blur and I felt a huge sense of loss. I had no one to talk to really. Only a handful of people knew and it was never mentioned. Probably because the people who did know didn’t know what to say, maybe they

wondered if I wanted to talk or not. I think if they did know they would have been more than happy to help me. But I did want to talk, I really wanted to just talk to someone. My baby did exist and now it didn’t, I really wanted, needed to get my feelings out, to make sense of what had happened. Just to get the thoughts out of my head. But miscarriage isn’t really spoken about so it was our awful, heartbreaking secret. I put on the mask I had become so experienced at putting on previously through my depression. Greeting people with smiles and “I’m fine!”

This pregnancy had confirmed one thing though, we really did want that 3rd baby so very much.

We were blessed to fall pregnant 6 weeks later. But when I saw the positive test a huge sense of anxiety hit me. What if I lose this baby too? What if there’s something wrong? I can’t go through it all again. We reached the same point we did before and no bleeding, all seemed OK….we got to our 12 week scan, and nervously waited to see a heartbeat…relief briefly washed over me but then anxiety….just anxiety, constantly. I never allowed myself to relax, any niggle, a small spot of blood I was in panic. Once the baby began kicking I was constantly monitoring it. My anxiety about health grew throughout the pregnancy. I was then diagnosed with Group B Strep, something else to panic and obsess about. Eventually my 9 month milestone rolled around and my beautiful baby girl was born, thankfully she was perfectly healthy.

Pregnancy was a roller coaster of emotions, anxiety, fear, hope and I found it draining. I didn’t have many people to talk to as the previous miscarriage had been secret. But Why?
Why can’t we talk about it? We should be able to, of course, it’s a horrible subject but it happens to so many couples around the world every single day. We need to talk about it, we need to break the taboo so people can open up and talk to others about how they’re feeling. I bottled it up and it manifested itself as terrible anxiety. Maybe if society were more open about the subject I would have felt I could say to people I had lost my baby, and I needed some support. Because I did.

If you’re feeling alone, if this has happened to you (and I’m so deeply sorry if it has) please just talk to a friend. Someone you feel you can open up to. I kept thinking if it was my friend who had gone through this that I hope they know they can talk to me. Friends/family they’re happy to listen, they want to be there for you. If you know someone who has gone through this, please 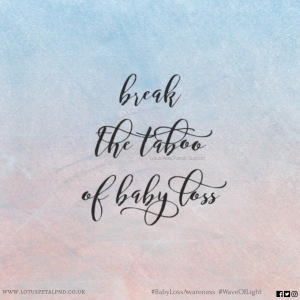 offer to listen, give some comfort. It will be appreciated. I didn’t know whether people would feel comfortable talking to me about it, but I wanted to. The miscarriage wasn’t a forgotten secret, it was my baby, a baby which lived as I carried them for a short couple of months, a baby who I never got to see, never got to hold, but it was still my baby who we loved.

As a society we need to be more open about this subject. Losing a baby at whatever stage is a traumatic and devastating thing. The person and couple going through that need to be surrounded with love and support, but the way things are at the moment where miscarriage and baby loss is taboo, the couple tend to grieve their loss alone.

Please join Wave Of Light on 15th October at 7pm, lighting a candle to remember our lost little ones xx

Lotus Petal Family Support is a peer support network based in Essex, UK. Aiming to provide, support, friendship and advice to help those suffering postnatal depression get the help they deserve. We are volunteering and working to raise awareness and help improve perinatal mental health services in Essex. View all posts by Sarah

6 thoughts on “The Taboo of Baby Loss”

Author of "Happily Ever After : My Journey with Guillain-Barre Syndrome.

Blogging about motherhood,the madness it can bring and the muddles I find myself in.